The Yale Glee Club is a vibrant musical community whose members represent a broad range of backgrounds, academic interests, musical experiences and more. One of the most valuable aspects of being part of this group is the connections made through music. From international tours to evening rehearsals to apple-picking adventures, YGC is both an exciting musical ensemble and a lasting community. Hear from several of our current members about their personal experiences and what they love about YGC!

I knew I wanted to join the Glee Club from the moment I heard them sing in the first-year opening assembly—what I didn’t know was how important Glee would become in my Yale experience. From the moment I joined Glee, I was exposed to a huge range of stunning music, met a group of 85 incredible people, had something fun to do every Monday and Wednesday night, and had big things to look forward to (like our international tours or our retreat to a beautiful lake where we learn our rep!).

One of my favorite moments was on our winter tour in 2018 to Maryland and New York. We were given time to have lunch on our own in Baltimore, and I joined a group of people I barely knew. We embarked on an adventure through an unfamiliar city, found a diner Guy Fieri had been to (???), and discovered a mysterious playground. These people became some of my best friends, and there have been many fun, heart-warming, music-filled moments with them since then!

I really hope you consider auditioning for Glee—it’s come to mean more to me than I could have dreamed, and you couldn’t find nicer people than these anywhere. 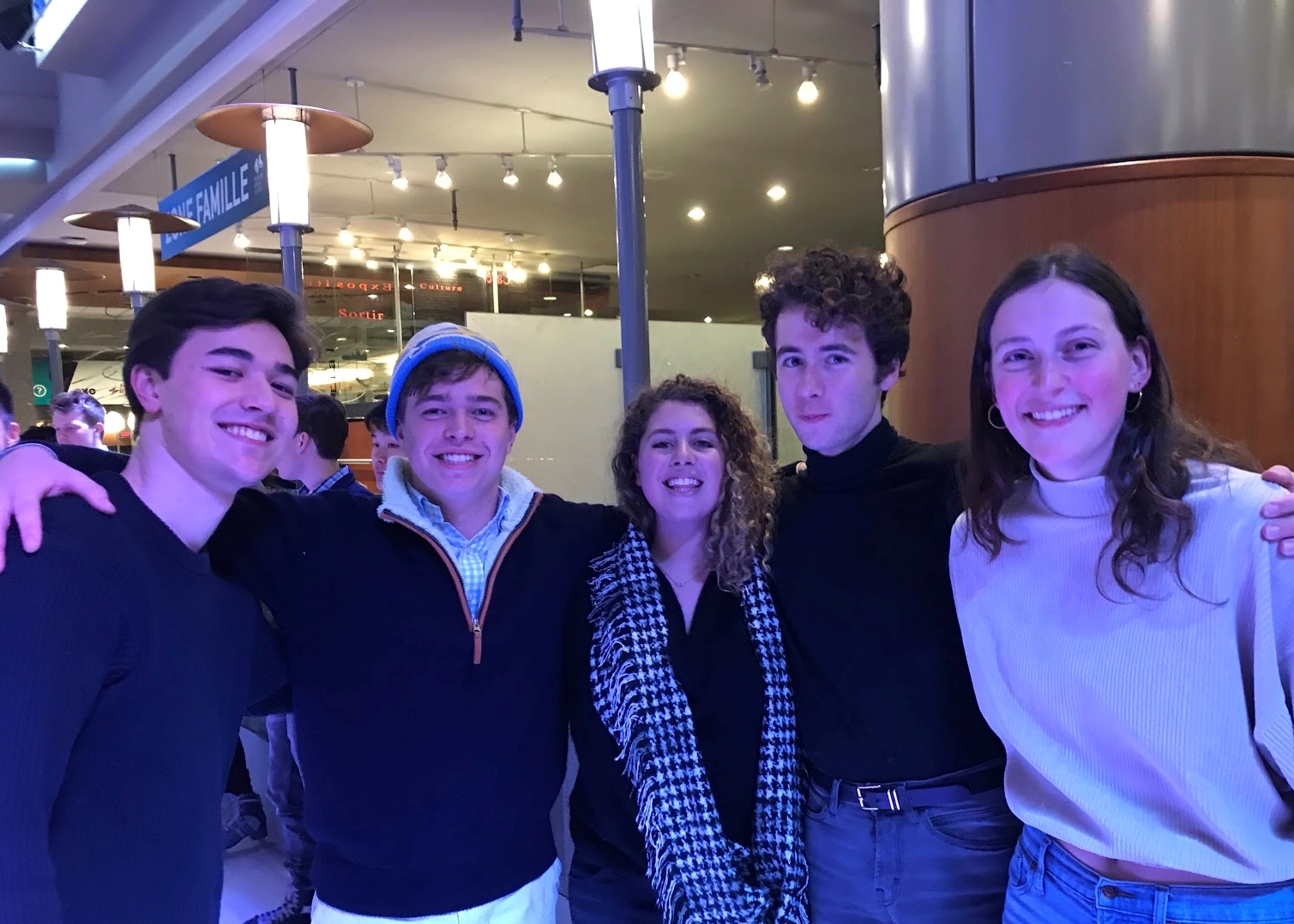 Lucy (right) with Will, Nick, Lena, and Zev in Montreal on our 2019 winter tour—everything’s blue from the light in the skating rink!!

Before joining the Glee Club, I had never sung with a choir before. I was a little intimidated by the audition process, but Jeff was incredibly encouraging and positive and made me feel really comfortable and welcome.

The Glee Club has shaped my Yale experience in so many ways and has become an integral part of it. I love the many Yale traditions that we get to be a part of, like singing at the first-year assembly and at commencement; the Glee-specific traditions, such as our singing dinners with alumni, that bring us together with a much larger network of Glee; and the really special feeling I get twice a week at rehearsal and during concerts and tours, when we come together to make beautiful music.

I think one of my favorite concerts was a concert we shared with a choir from Les Petits Chanteurs de Laval during our 2020 Winter Tour in Montreal. They gave us the warmest welcome and were incredibly receptive to and excited about our music and singing. I remember feeling a deep sense of happiness during this concert that really represents the way I feel whenever I am with the Glee Club.

I am so glad I decided to audition for Glee and I am so thankful to have been part of such a special group of people. I hope you consider joining us too! 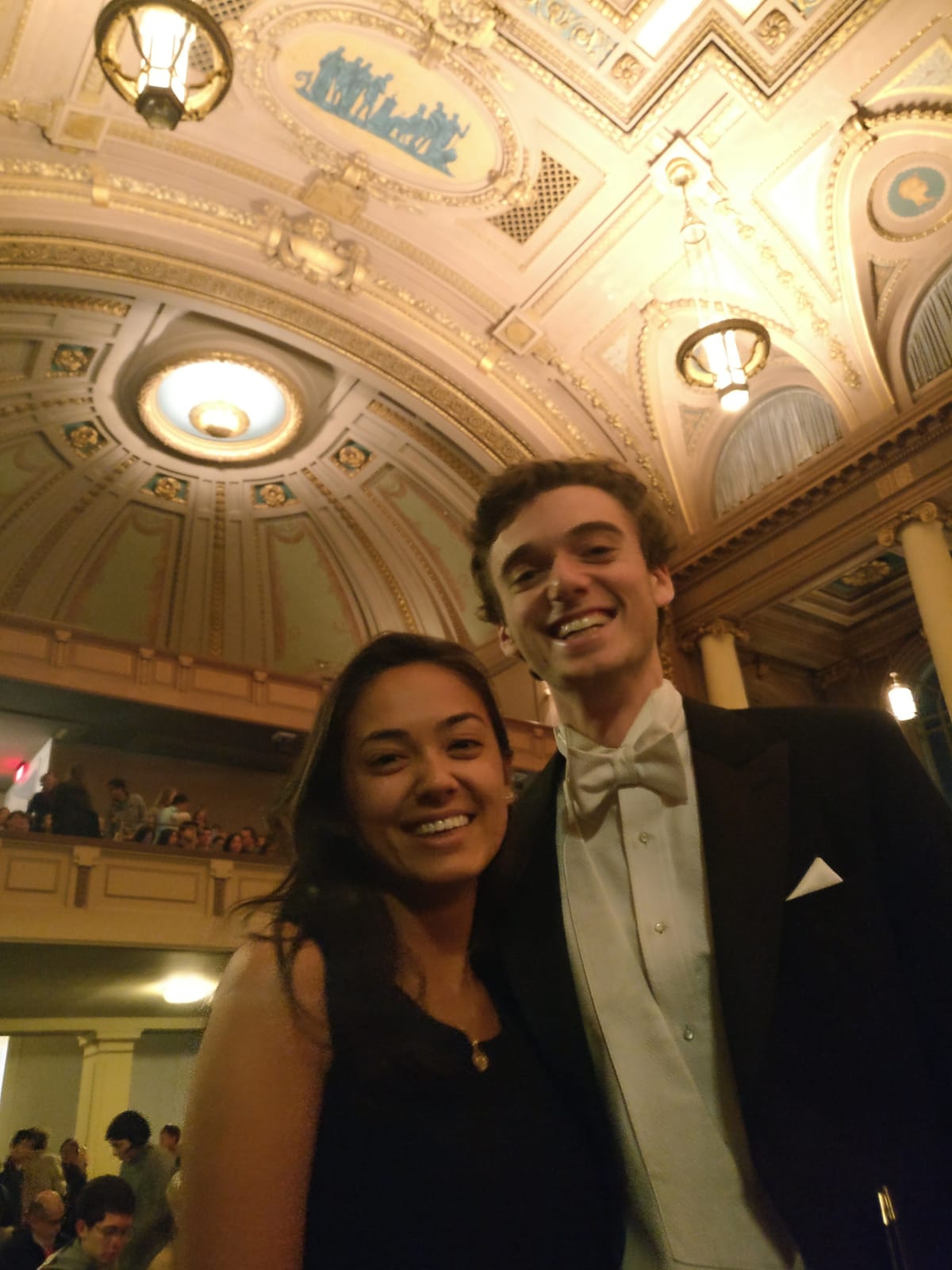 Before college, the only singing I had done was in the shower at home (much to the dismay of my family). I stumbled upon Glee Club by accident—a friend I met on FOOT (First-year Outdoor Orientation Trips) convinced me to audition, and I sang along to YouTube to prepare. When I got in, I was incredibly intimidated by all the talented musicians that surrounded me—it seemed like everyone was an experienced singer, and here I was, never having sung in public besides in my audition (if that counts). But I quickly realized that the Glee Club is full of warm, friendly, welcoming people, who accept you, no matter what.

Our fall retreat introduced me to the amazing group of people that I now call family, and both our winter tour to Baltimore and New York and our spring to the UK in 2019 reinforced those friendships. These people have been with me through thick and thin: I’ve cried at 2 am with some, I’ve done final projects with others, and one of my favorite memories is FaceTiming my co-tour manager while simultaneously doing laundry at 3 am before tour. These are the people that I find myself reaching out to during this pandemic, and the community and support of Glee Club has been so instrumental in keeping me sane. YGC is not just a choir, it’s a family. I did choir in high school, and one of the things that I love the most about being in a choir is the strong sense of community among its members. When I came to Yale as a first-year, I knew I wanted to find that sense of community again, so I auditioned for the Glee Club. After being in Glee for a year, I can honestly say has been one of my best decisions of how to spend my time at Yale.

One way that new members get brought into the Glee community is through “Glamilies,” or “Glee Families” (we like to stick a gl- prefix on things). Essentially, all new members get matched with one or two upperclassmen as their “parents,” and they’re some of the first people you get to know well in Glee. As the year goes on, you get really attached to your glamily (I ALWAYS say hi to my Glee mom in every rehearsal, and we take glamily pictures at almost every social event and concert). It’s also a great way to get to know people in other classes and vocal sections. I hope you consider auditioning for Glee! We can’t wait to welcome you into our choir glamily. 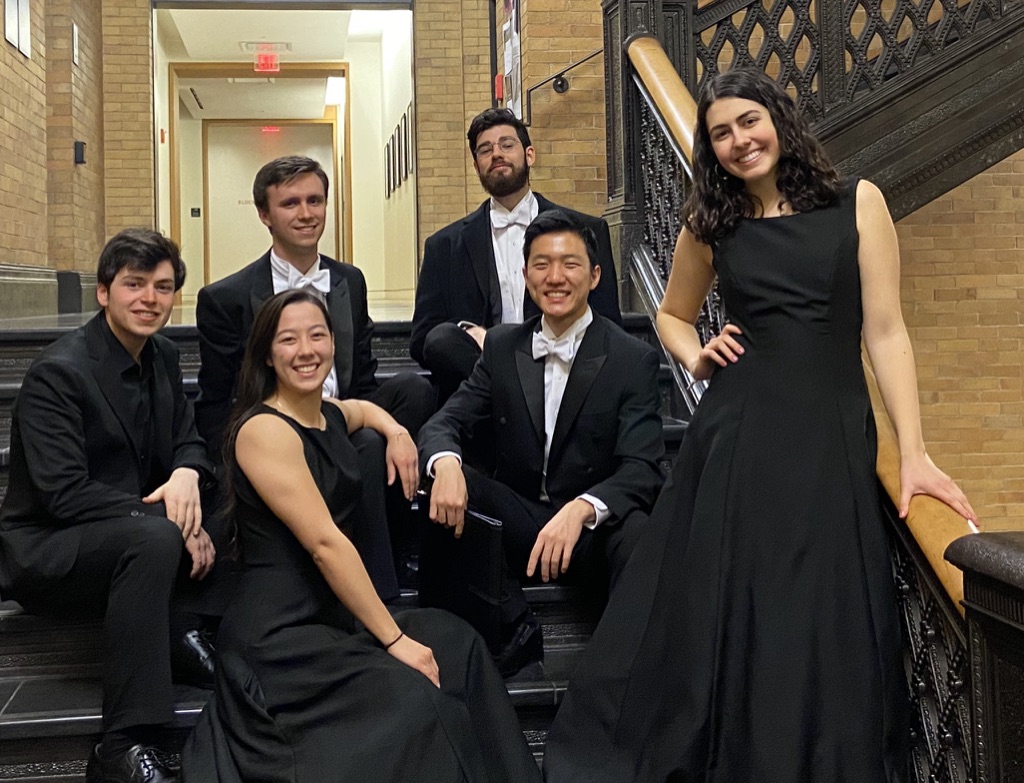 When I arrived at Yale, I was adamant that I wanted to be a part of a choir. Music had always been so important to me, so I knew that college wouldn’t feel right without music. When I auditioned and got accepted into Glee Club, what I didn’t realize is that I was gaining so much more than a place to sing- I gained a community of 85 of my best friends on campus.

One of my favorite Glee Club memories is when we were on tour in the UK in 2019. We were in London, England visiting St. Paul’s Cathedral, and while standing on the front stairs, we decided to sing Beati Quorum Via by Charles Villiers Stanford. We were all standing in a circle, singing without a conductor and just looking at one another. I remember tourists stopping on the outskirts of the group, taking videos and standing on ledges to catch a view. I can still clearly imagine everyone making eye contact and smiling so big. I felt such a feeling of unity and togetherness in that moment- it is something I will never forget.

For me, the best part of Glee Club will always be the people. We get to be conducted by Jeffrey Douma, we get to know some of the kindest people at Yale, and we get to collaborate with welcoming choirs all around the world. It is truly a blessing to be a part of this amazing choir, and I really hope that you will consider joining our community. 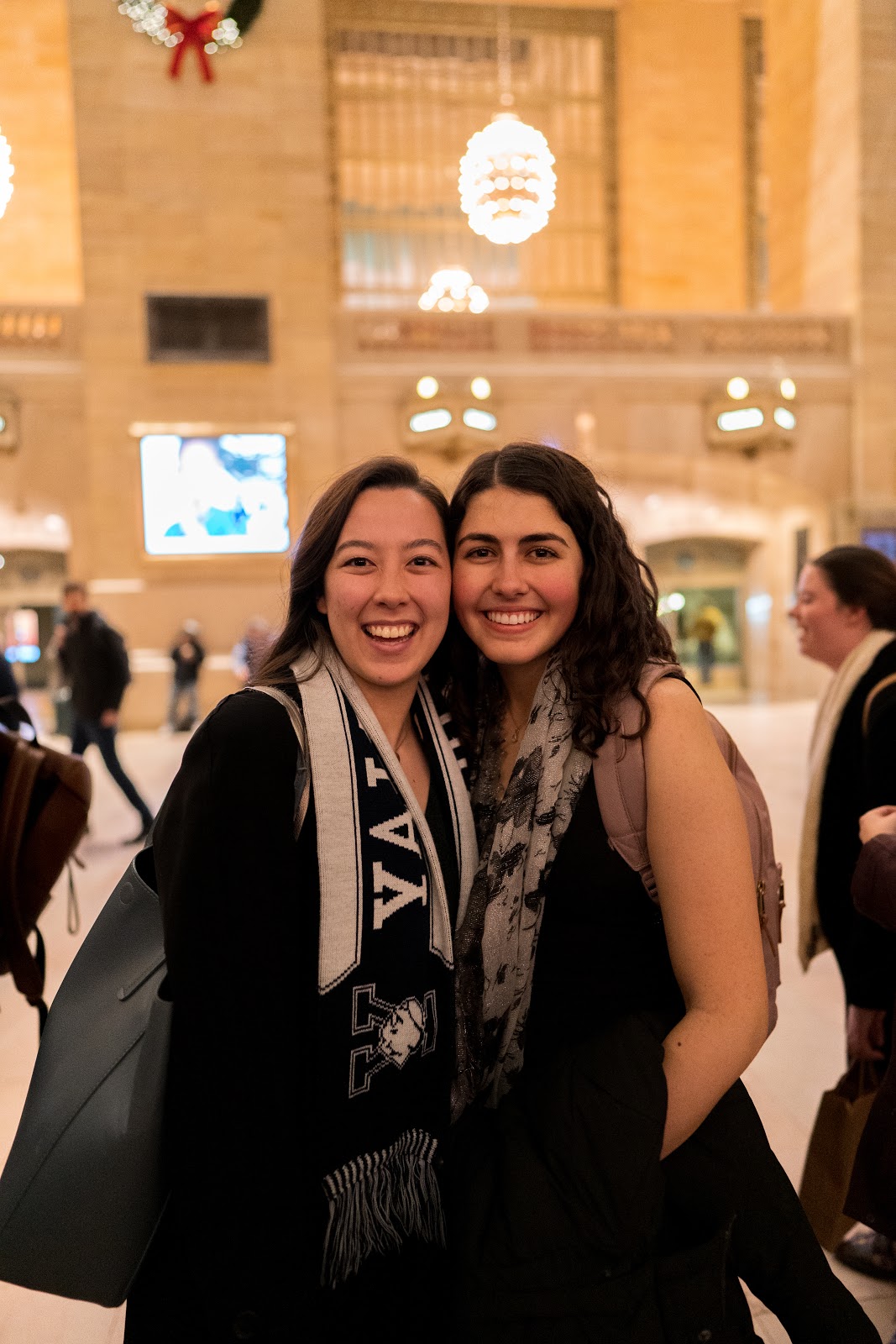 I am not a group person. My social life in high school was at the Venn Diagram intersection of sports teams, STEM and humanities nerds, theater and choir kids—a space I occupied alone. When I got to Yale, all the first years in my college except me (or so it seemed) immediately emulsified into squads. Then I joined the Glee Club, and my primary extracurricular commitment became membership in a group of 80-90 people. That group has become one of the most important communities in my life.

There is an “order out of chaos”, fractal-like beauty to Glee friendship formation, and my fondest memories and closest relationships in the Glee Club have all been unforeseeable. My first friend in college was a senior who reached out to me when I was sitting alone at Fall Retreat, and for the rest of the year we sang folk tunes together in the staircase of the Yale Art Gallery. I found a kindred spirit in my first Winter Tour roommate, our first ever conversation lasting until 2am in a stranger’s guest room. Through countless other chance encounters over the past three years,  I have grown in awe and affection for the rich individuals of this choir. Singing with them–listening and blending and allowing my voice to be subsumed in theirs–is one of the greatest joys in my life.

After three years of singing with the Glee Club, I am still not a group person. But I am very much a Glee-Clubber. Who wants a group when you can have a family? 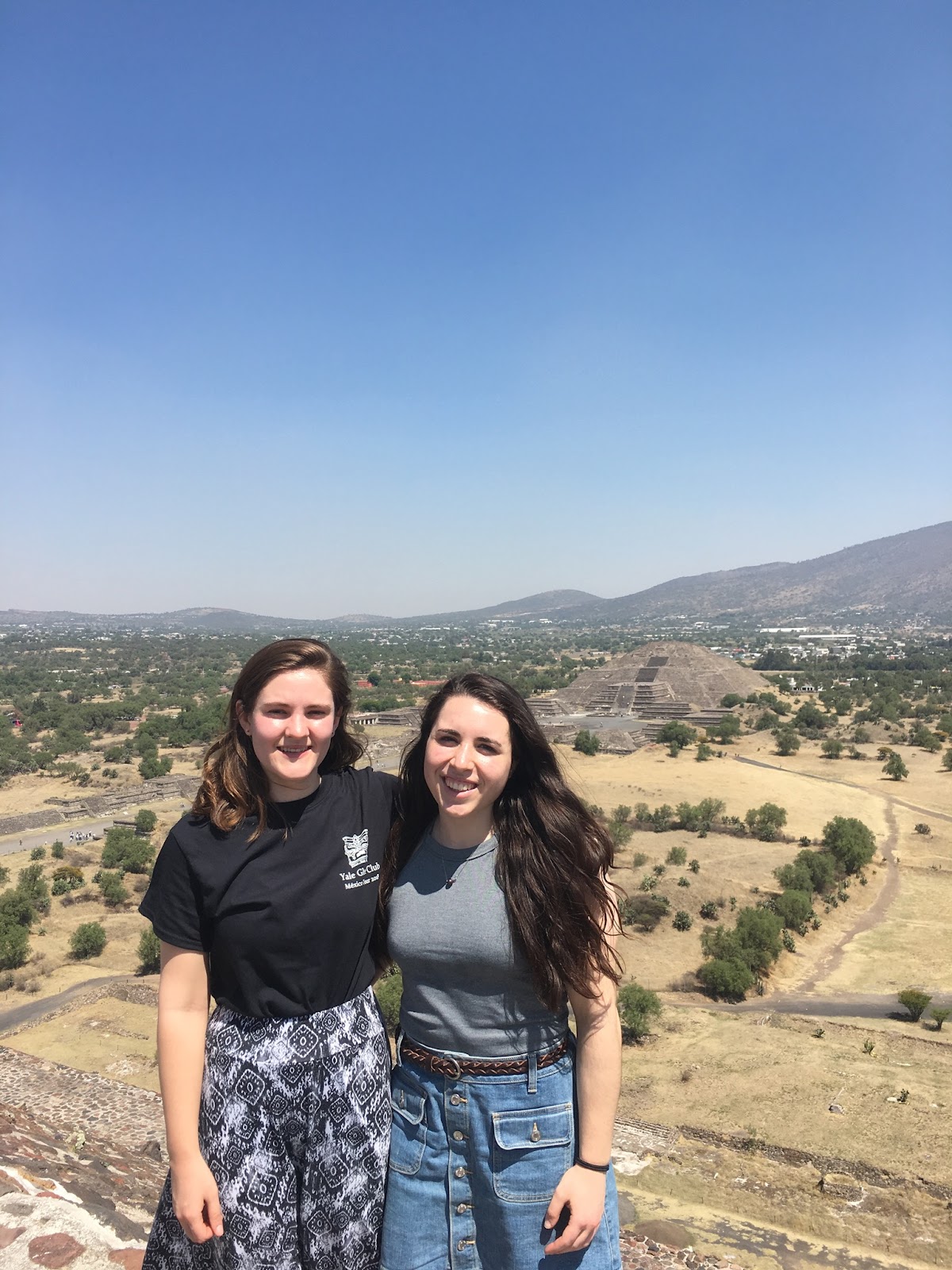 Raquel (right) with Magda on tour in Mexico, Spring 2018

At the welcoming ceremony in the fall of 2019, first-year me was absolutely awed by the incredible music showered on us from above by the Yale Glee Club as they sang “Raise Your Voices,” one of the traditional Yale songs. I had thought previously about trying out for Glee Club, but at that moment I was certain that this was a group I wanted to be a part of. I sang a little bit in high school – I’m from a rural area, so our choir was lucky to have one or two lower voices – but the skill and precision of the musicians above us on the balcony intimidated me.

During my meeting with the officers of the Glee Club, though, which is part of the audition process, I was delighted to find that the people were as wonderful as their lovely voices. As the year continued, Glee Club became a place where I could not only hone my skill but also relax, have fun, make wonderful friends.  Tour, concerts, even rehearsals are some of my brightest and most joyful memories of my time at Yale so far. After a year of singing with the Glee Club, I’m just as awe-filled by my fellow singers – at their musical talent, their dedication, their multifaceted interests and activities, and perhaps most importantly, their kindness. I hope you, too, are inspired to raise your voice with us! 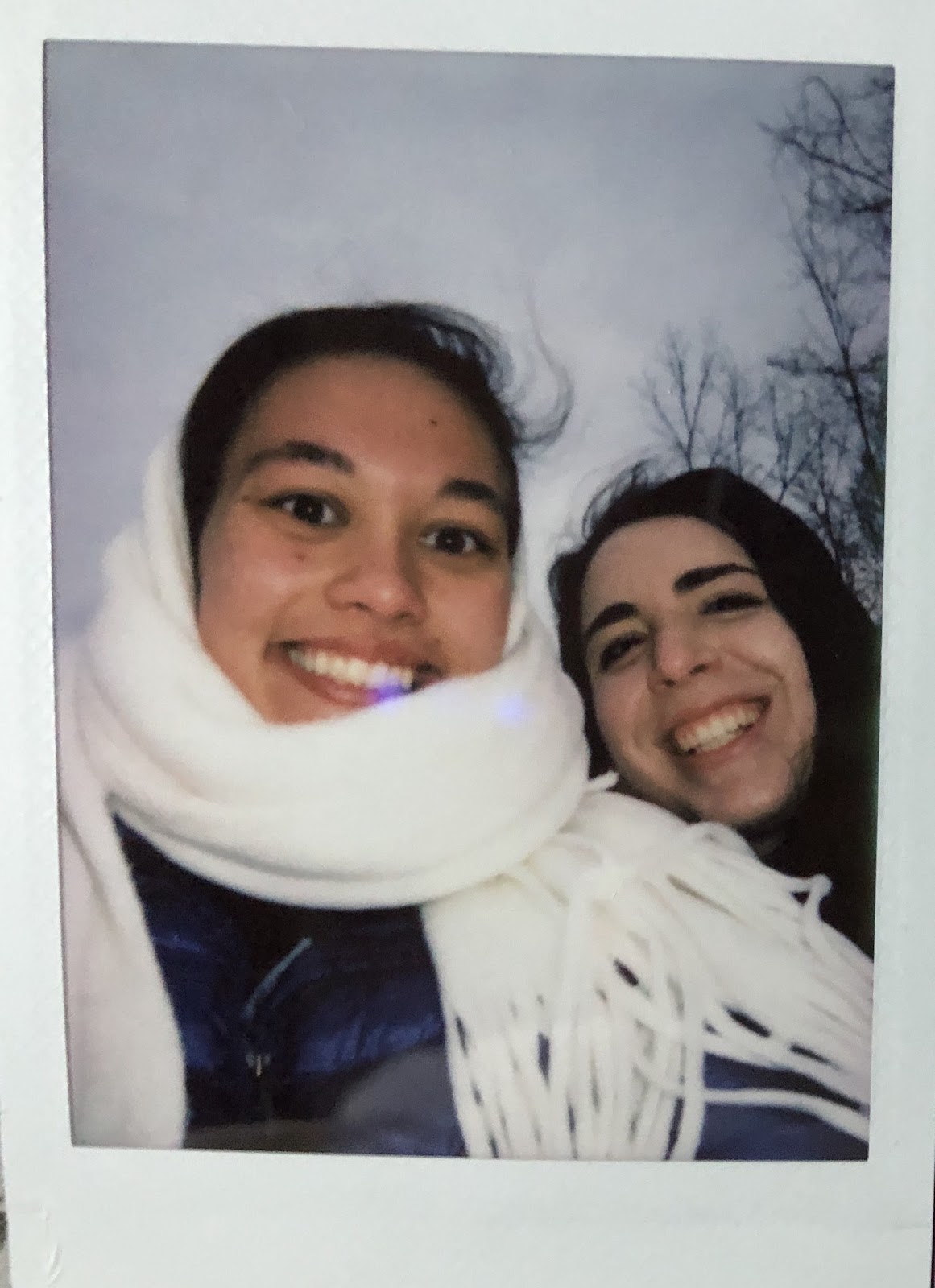 Emily (left) with Raquel, her seat-buddy, on Winter Tour 2020 in Vermont