From its earliest days as a group of thirteen men from the Class of 1863 to its current incarnation as a 90-voice all-gender chorus, the Yale Glee Club, Yale’s principal undergraduate mixed chorus and oldest musical organization, has represented the best in collegiate choral music.

In recent seasons, the Glee Club’s performances have received rave reviews in the national press, from The New York Times (“One of the best collegiate singing ensembles, and one of the most adventurous…an exciting, beautifully sung concert at Carnegie Hall”) to The Washington Post (“Under the direction of Jeffrey Douma, the sopranos - indeed, all the voices - sang as one voice, with flawless intonation…their treacherous semitones and contrapuntal subtleties became otherworldly, transcendent even”). 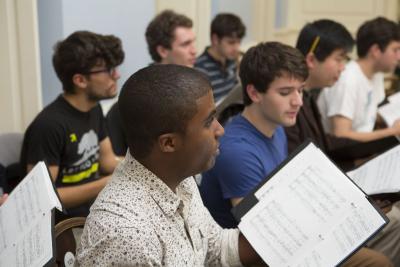 The students who sing in the Yale Glee Club might be majors in Music or Engineering, English or Political Science, Philosophy or Mathematics. They are drawn together by a love of singing and a common understanding that raising one’s voice with others to create something beautiful is one of the noblest human pursuits.

A broad spectrum of great music

The Glee Club’s repertoire embraces a broad spectrum of choral music from the 16th century to the present, including Renaissance motets, contemporary choral works, world folk music, and traditional Yale songs. Committed to the creation of new music, the Glee Club presents frequent premieres of newly commissioned works and sponsors two annual competitions for young composers.  They have been featured on NPR’s Weekend Edition, WQXR’s “The Choral Mix,” and BBC Radio 3’s “The Choir.” 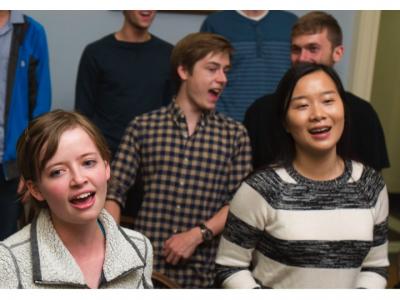 One of the most traveled collegiate choruses in the world

One of the most traveled choruses in the world, the Yale Glee Club has performed in every major city in the United States and embarked on its first overseas tour in 1928. It has since appeared before enthusiastic audiences throughout North and South America, Europe, Asia, Australia, and Africa.

Bringing musicians of the world together

Historically a leading advocate of international choral exchange, the Glee Club has hosted countless guest ensembles at Yale and at New York’s Lincoln Center in conjunction with its own international festivals.  In 2012, the Glee Club carried this tradition forward with the first Yale International Choral Festival in New Haven, and in June of 2018 presented the third incarnation of the festival, hosting choirs from Sri Lanka, Mexico, Germany, and New York City, along with the Yale Alumni Chorus and Yale Choral Artists.

The Yale Glee Club has had only seven directors in its 161-year history and is currently led by Jeffrey Douma. Previous directors include Marshall Bartholomew (1921-1953), who first brought the group to international prominence and who expanded the Glee Club’s repertoire beyond college songs to a broader range of great choral repertoire; Fenno Heath (1953-1992), under whose inspired leadership the Glee Club made the transition from TTBB chorus to mixed chorus; and most recently David Connell (1992-2002), whose vision helped carry the best traditions of this ensemble into the twenty-first century.

Auditions are held during the first week of fall classes, and are open to all Yale students.