• Mixed choir (SATB, divisi possible)
• Unaccompanied, with keyboard accompaniment, or with instrumental accompaniment of not more than three individual instruments
• Three to five minutes duration
• Preference will be given to unpublished works that have not received premieres outside of informal academic settings
• Rights to text must be cleared and evidence of copyright holder’s permission must be shown
• Secular or sacred text
• Level of difficulty suitable for a college choir or community choir 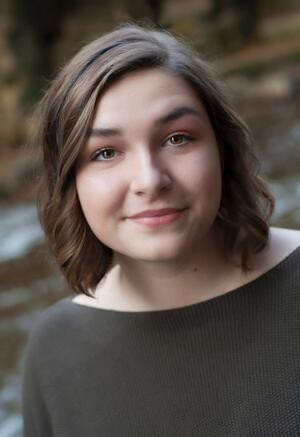 Congratulations to the winner of the 2022 Yale Glee Club Emerging Composers Competition, Corrine Klein, for her composition of to be one with each other.

Corinne Klein (b. 2002) is a composer and musician based in Chicago, IL. Originally from Green Bay, WI, Corinne is now studying Music Composition and Music Education at DePaul University with the goals of fostering creative expression in the classroom as well as making music accessible and enjoyable for all types of learners.

Corinne began composing as a way to channel her complex internal emotions and turn them into something that can be universally experienced. The expressivity and tonal ambiguity of her music seeks to replicate feelings of specific abstract concepts often difficult to describe.

Corinne has studied composition under Dr. Osnat Netzer, Dr. Frederick Gifford, and Dr. Christopher Jones, and has had works performed by the Pyrenean String Quartet with the Fulcrum Point New Music Project as well as Kyle Bruckmann and Matt Ingalls of sfSound.