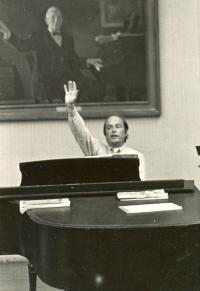 The Fenno Heath Award was established in 2005 to encourage the composition of new Yale songs by Yale student composers, and is named in honor of Fenno Heath, beloved former conductor of the Yale Glee Club and the composer of many immortal Yale songs.

The composer of the winning song will receive a $500 cash award, a premiere performance by the Yale Glee Club, and possible publication in the next edition of Songs of Yale.

Songs must be composed for mixed chorus with or without piano accompaniment, and should be approximately two to three minutes in duration. Because Yale songs are traditionally an informal genre, it is also recommended that composers aim for a piece that will not require a great deal of rehearsal time.

The text - which can be humorous, nostalgic, reflective, satirical - should in some way touch upon the composer’s Yale experience, but need not mention Yale by name.

All applicants should submit a resume and a PDF of their composition to sean.maher@yale.edu by Wednesday, October 16, 2019. Applicants should omit their names from the composition itself but include them in the resume. When we receive the submission, we will separate resumes and compositions to ensure anonymity in the judging. Former Fenno Heath Award winners are not eligible to enter.

For more information on any aspect of the contest, applicants should contact Yale Glee Club director, Jeffrey Douma (203-432-4138, jeffrey.douma@yale.edu)